Tarpon fishing is what I consider to be the pinnacle of most fishermen’s careers, then what’s next? Well you can always tarpon fish with a fly rod. Tarpon are a challenge no matter how you catch them. Whether it’s live bait at the bridge, drifting the passes with heavy tackle, or my favorite, sight fishing the beaches, they are a challenge. If you’re one of those people who are die-hard fly fishermen, a regular tarpon fisherman looking for a new challenge, or an outdoorsman looking for the ultimate outdoor feat to accomplish, tarpon on the fly is it. 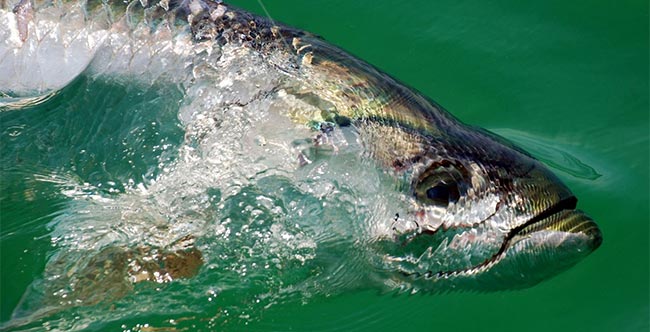 Imagine its day break; the water is still dark and the sun is barely helping your underwater visibility. Not to worry though because there are few boats on the water and three large schools of 50 to 100 tarpon each are milling on the surface within view, just to the south of your location. The water is glassy with a slight ripple as you look offshore. All you can hear is the hum of the trolling motors as you close the distance on the first large school of tarpon. Your heart starts beating faster as the boat gets closer; now you can hear the tarpon as they roll across the surface, fins, tails and that giant half dollar size eye. Your 12 weight is loaded and ready. Your guide tied the Black Death fly the night before, it’s on the end of your rod and you have to make the perfect cast. With anticipation mounting at 30 yards away, the 100 tarpon are coming to you. All I can think now is the perfect cast and you’ll definitely have a hooked fish. “Cast 12 o’clock now,” the captain yells out. You hastily cast but, oh no, you stepped on the line, damn it, you’re short. “Calm down,” yells the captain, just think about the cast. You strip in quickly and cast again. Now you’re in the zone and the fly lands perfectly, tarpon are rolling all around it and you begin to strip in the fly and keep on striping. Nothing happened, what’s wrong, I can’t believe it you think. Now you’re determined. Another good decent cast again but nothing happens. It’s cool out, but yet your palms are sweating with excitement and anticipation. Man all you can think is bite it, bite it. Another good cast and the captain yells “let it sink.” You do so and again he yells, “Start striping a little faster.” Strip, Strip, Strip, thump and a large flash goes off six feet under the water, as if someone dropped an M-80 over the side. “Strike,” yells the captain and you bury the hook home, a 130 pound tarpon comes cart-wheeling out of the water. Mayhem, all hell breaks loose; you just hooked your first tarpon on the fly.

Now I could finish the story, go into detail about the tremendous hour plus battle, and it is exciting, but what I’m really trying to depict is the anticipation of the hunt. There’s nothing like it. Seeing those tarpon, stalking them down and then making the perfect cast with the fly rod. The anticipation of the bite and then finally that thump on the end of your line. The practice in the backyard, the airplane ride, the magazine articles you have read, the dreams while you sleep all finally come down to one moment, the thump in your line. That’s a real tarpon that just bit your fly and that’s a real battle you’re about to enjoy.

There is nothing like the thrill of a tarpon
exploding out of the water after the hook set.